Can I just take a moment to express my hatred for beauty pageants? Okay thank you.
So I'm making the evening's dinner in the kitchen when I overhear a show on television--TLC even about a little girl's beauty pageant. Can you believe that they awarded a little girl the title "Most Beautiful"?

Seriously are you kidding me?

Let's say there are 10 girls in that competition (ages looked to be around 5 or 6)
and 1 girl get's awarded "Most Beautiful".
Those other 9 girls go home feeling every bit of less than beautiful.

I just think its wrong for little girls to be subjected to that. It plants a seed early on that only will fester and worsen as she matures and her insecurities begin to eat at her.
It's just not fair.
I just hate that little--beautiful girls around the world are entering contests that reinforce feelings that they will struggle with at a much later age at such a young vulnerable age. We should be teaching our daughters that every girl--every child is amazing and precious in each his or her own way.
We wonder why America's so vein.
Some of those mother's on that show should be ashamed of themselves.
I saw one mom's reaction when her daughter didn't place anything, and I immediately felt the need to slap the mother and hold her little girl and tell her how beautiful she is.

Alright.
Now that that's out of my system.

Adeline tasted chicken for the first time today. HATED IT!!!
She gagged and refused to come close to the spoon again.
Probably shouldn't have bought it in bulk at Sams, because I have a gallon sized ziplock full of frozen purreed chicken in the freezer.
Haha, guess we'll try that one again later.

She hasnt' been herself lately, which I'm chalking up to teething?
She hasn't run fever and her runny nose didn't ever reappear today, but she has just been awfully attached and fussy and just not herself.
She normally just lays in her bed and goes to sleep for nap/night time.
Today we rocked and rocked and rocked, which I dont' mind so much...
This was after a 2 minute fit in her crib--followed by a 3 minute fit in her crib--followed by 25 minutes of rocking. 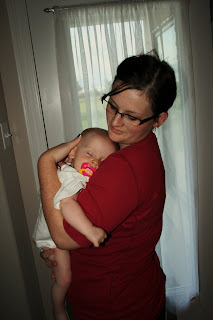