It's been a month since I've been at the gym, and I've made some eating changes around the house.
I've lost a grand total of: nothing.

It's really discouraging, because I feel like I've earned at least a few pounds to be deducted off of that big number the scale flashes at me.

I remember when we were 16 or 17 Philip and I joined the YMCA. He was getting into making big muscles, and I simply worked out on the elliptical while he did so.
It wasn't every day, and it wasn't even long periods of time, but that little bit of exercise in my life helped me to almost effortlessly lose 20lbs.
I remember we'd work out at the gym, and then go to Wing Stop and eat fried chicken wings afterward.
I know, right.

Now I feel like I'm really going very much out of my way to drop some weight and it's being almost as stubborn as my hard headed husband can be.
Hey Philip, yep. I totally just blasted you on my blog.
;)

I'm the same weight I was before I got pregnant with Gideon, which still isn't a good weight to be at, but at least I'm not way over, eh?

I always heard women say this, but I really questioned their honesty:
My body sucks after having 2 kids in 2 years.
Seriously!
I could go on and on about the obvious and not so obvious changes and gross things that have developed, but I'll spare it all for my future memory's sake.
It's just everything is in the wrong place, and it's proving to be difficult to fix.

Okay, so if I throw out carrying 2 babies in 2 years, 2 dramatic childbirths, and breastfeeding for a year and a half, I really don't have any other excuses.
Besides that I've been struggling with my weight since I was 6.
and it's been hard.
but I'm trying not to whine.
okay obviously I'm whining.

So. Old plan not working=new plan into effect.
I go to the gym every morning on the week days.
Every other week day I'm doing the Couch to 5K program. 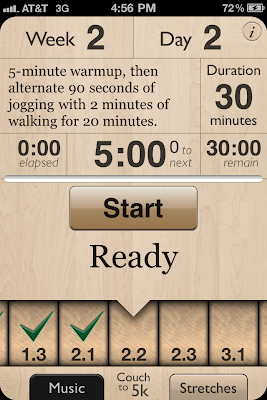 I'm currently in the middle of week two, and I really like it.
It's building up my endurance, and it really pushes me towards a goal.
I like that!
So every other week day I do that and strength training [usually on my arms] in the gym.
On the days I'm not doing C25K I'm on the elliptical for 40 minutes or until I burn about 400 calories, whichever comes sooner.
I'm lucky because my mother in law watches the babies for me for an hour every week day morning at like 7:30 for me to get to be able to do this. I really appreciate it, and I love that she enjoys watching them so much.
On the weekends I can stay as long as I want because Philip normally keeps the kids while I go. Sometimes it's kind of a bummer because I'll go, work out, then get home and he'll go and work out. So we spend a few hours apart on the weekends doing the same thing. Someone has to watch the kiddies though, so we don't mind.

As far as diet goes, I was just trying to be more conscious of what I ate, which for the passed month apparently wasn't good enough.
Now I have an app on my phone where I upload all of my calorie intake and outake for that  matter. 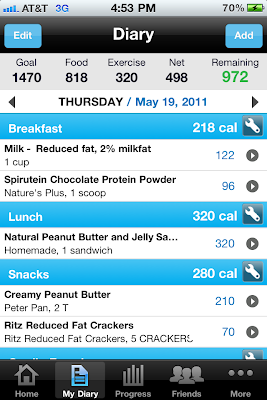 You put your weight in, your goal weight, how much you want to lose a week, and it calculates how many calories a day you can eat to obtain your goal.
It subtracts calories throughout the day as you enter and eat and it adds them when you exercise.
I'm normally good about what I eat during a meal, but I'm bad about snacking. So I like to enter what I'm going to do for breakfast, lunch, and dinner each day and then see how many calories I have left to snack with. Haha.
[That app is myfitnesspal]

That and an increase in water and sleep [yea right]. Will hopefully result in some kind of weight loss some time soon.
I really hope so, because I'm so trying!!!!

In other news, my computer has been slowly dying since like January. My internet connection is so slow I can hardly even read any of your blogs anymore. I can't online shop, or edit photos either. Well, I could do all of that, it would just take a really long time.
I'm hoping it holds off a few more months, because I have our extra change allocated to savings for something special!

Well Friday is tomorrow and as always the weekend will follow. We have 1083 things to do, as usual so if I'm not back to wish you a happy weekend, I'll say it now.
Take care readers! :)
Posted by CourtneyKeb at 5:05 PM