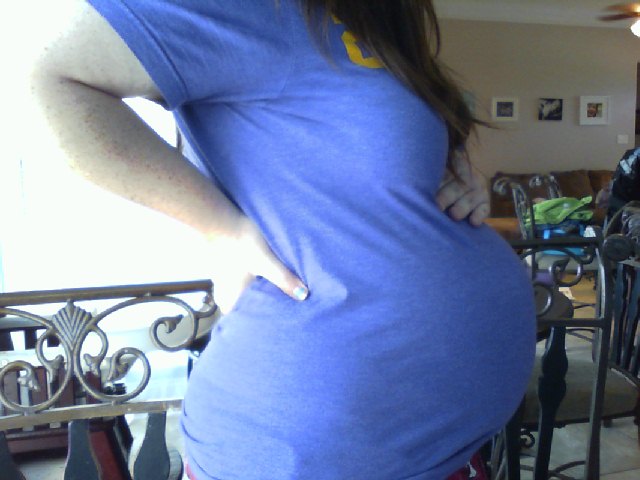 I feel as though I'm full term pregnant right now.
Obviously that's what I look like too, because in the past 2 weeks I've heard a lot of this:
"Girl you look like you about to pop!"
"Oh Momma when are you due? You look like you could go any day!"
"Are you sure there's only one baby in there?"
and variations of the three circulate throughout mostly strangers and some friends.


[btw I think the last question of the three is the absolute meanest! I mean am I sure I'm only carrying one child? Did you know better than my doctor, ultrasound tech, AND me... the mother? No didn't think so.]

When I was pregnant with Gideon I was asked A LOT if I was pregnant with twins.
Once time I made the situation super awkward and cried, and another time in a gas station while checking out a Twix and a chocolate milk I totally lied and responded with, "yep! TWINSIES!!!'

I did immediately feel guilty though because the attendant asked the gender of the babies, in which I pretended not to hear her and fussed Adeline for not doing anything so I'd be too busy to answer.

BUT YOU KNOW WHAT PEOPLE?

I know I'm gigantic.
I know, and right now I hardly care.
except when I'm waddle running and winded quickly.
In a few short months I'll be holding another precious baby God's given us, and I'll be pigging out on carrot sticks and lettuce., mkay?.

I know most times people don't mean to be insulting, so I really don't get too offended anymore, but we should all remember the vulnerable state of a crazy, large pregnant woman.
I apologize for sporadic tears and meltdowns if you accuse me of carrying multiples.

I'm blessed with a really kind husband though, who thinks I'm at my prime when I'm pregnant.
Most times that makes me furious because when I'm pregnant I feel as though I'm at my absolute worse.
This pregnancy the hyperemesis has been lighter of a load, but with being on my third child I feel like my body is just.... worn out and stretched out.... and just a whole lot of bleh.
It's nice though when I've had a day full of 12 conversations like this:
"When are you due?"
"End of August."
"Oh wow, I was thinking next month."
I have a husband who thinks pregnant is sexy.
Which is really just an incredibly insane statement to me, but whatever. I'll take that right now, weirdo hubs. 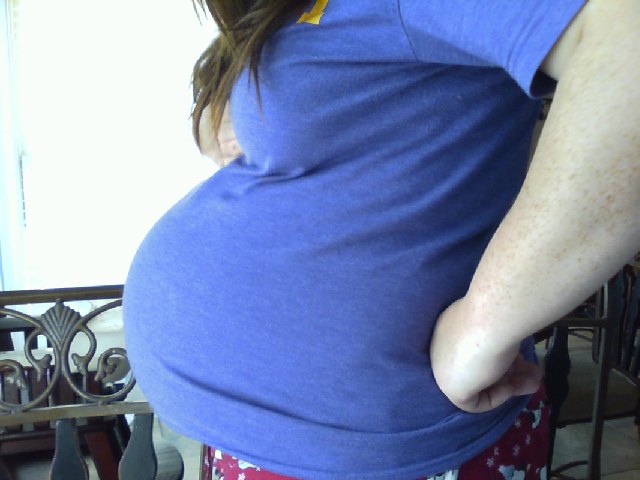 Man. With my history of carrying til 40 weeks, I will probably answer to having triplets.

On a side note of complete and utter disappointment.
I cannot find my favorite pregnancy shirt ANYWHERE.
My Philip's fish tee is MISSING, and the rest of the tee shirts around here slip up and let my belly peek out.
I'm incredibly sad about this.

Also, Philip felt a little Selah high five or elbow at church on Sunday. Adeline got to feel a booty or a head or something yesterday. I tried to let Gideon feel too, but he was not interested at all. It's all good brother man, she'll be all up in your space very soon my son.

Okay. I think that's it on my pregnancy update. I go for my glucose screening at the end of this month. I always dread them so badly because I have trouble keeping the drink down long enough for them to test my blood. Then I have to retest until I keep it down long enough. I've never had any high blood pressure or glucose issues in my other pregnancies so I wish I could just have an honorary pass on this one. My doctor's kind of awesome though and he said if I can't keep the drink down the first time he'll give me a Snickers bar and call it equal.

It's all good. Hurry up August.
Posted by CourtneyKeb at 5:00 AM