Thankful for a Book

She had a will stronger than mine and her daddy's from the day she was born.
She couldn't just lay there if she was awake.
She had to be bounced and rocked and shown the lights and the colors of the walls and the wagging of the dogs tail and anything else surrounding us.
She cried all of the time.
Then infancy turned into babyhood and she was demanding, high maintenance, and all kinds of hands full.
Her toddler times were terrifying.
You ain't never seen a tantrum til you seen this kid's tantrums, and if you know us you've seen a few.

I seriously have struggled so much with Adeline's will and blatant defiance.
She has so often made me feel like the worst parent in the world.
I don't know how many nights I've cried to Philip about what else can I do, what are we doing wrong, how did I screw her up?

A series of recent/mortifying/comical events have made me feel at my lowest in raising her.
Dance class in the fall didn't quite work out for her.
While all of the other girls in her class had no problems standing on their designated tape on the dance floor and tapping their shoes when told or pointing their toes on cue, my kid would rather break it down all around the room in between these compliant little children.
Plus she threw a shoe at her teacher. Yea, that was embarrassing.

Then I had to go get her early from Sunday school at church a couple of weeks ago.
All of the sweet little three year olds were sitting in their chairs listening to the lesson when I walked in. Mine was on the floor on all fours growling like a lion.

I felt like I've been trial and erroring different methods of counteracting her defiance all to which come down to one thing. Adeline's will is much stronger than my own.
It's difficult to understand because as a child I was nothing like her.
I remember when I was 17 I got my first ticket.
I was devastated.I came home and told my mom and she didn't say a word. The silence killed me. I cried and cried and cried like the biggest baby because I knew she was disappointed in me.
I wanted to please my parents, in fact pleasing wasn't enough.
I wanted them to be beaming with pride, always happy with me.
I was like that with all of my authority figures.
I was the kid in class who was quietly sobbing because the teacher may have put a minus sign next to my B. Even now, I'm a people pleaser, which is probably in great why it's so difficult to understand why my daughter couldn't care less about pleasing..... anyone.

It's hurtful because she's an amazing child.
She's such a gift and I know God will use her in a way bigger than my imagination will take me right now.
I just want other people to take as much joy in her as we do.
and well, most of the time that's difficult.

Last week I ordered Jame's Dobson's The New Strong Willed Child.
I enjoyed his book Bringing Up Girls and I was praying he'd have something to offer me in this next read.
I've raced to the mail box every day since I've ordered until yesterday it was finally sitting there suffocating in a small brown package.
I tore that puppy open and got to reading.

and that.
my friends.
is what I'm thankful for today. 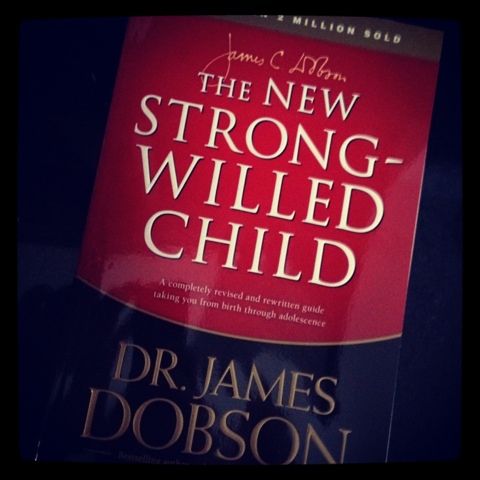 I read all evening yesterday.
I cried in the introductory when my goosebumps flared as Dr. Dobson described my child.
I cried through chapter two when a radio interview of 3 moms with strong willed children shared testimonies and stories of their defiant children, some of which seemed even more extreme than mine.

First, it is very common for these moms and dads to feel great guilt and self-condemnation. They are trying so hard to be good parents, but the struggle for control that goes on at home day after day leaves them frustrated and fatigued. No one told them that parenthood would be this difficult, and they blame themselves for the tension that arises. .......
Second, I have found that the parents of compliant children don't understand their friends with defiant youngsters. They intensify guilt and embarrassment by implying, "If you would raise your kids the way I do mine, you wouldn't be having those awful problems."

Dr. Dobson, I've never been more compelled to hug a stranger with such a tight force as I was after I read that. It's like..... you get me.
haha

The thing that has most clearly stood out is that the Lord gave me this challenging child for a purpose. He wants me to mold and shape her to prepare for a life of service to Him, and I'm up for it.
With the Lord's help and lots of prayer I feel so hopeful and encouraged. 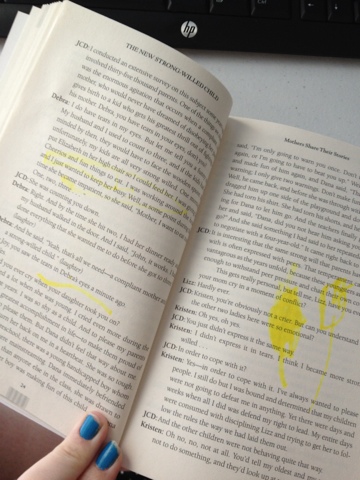 and lets rumble phantom highlighting child. I normally don't know when you'll strike.... but you can bet I'ma be ready for you next time.
;)

Posted by CourtneyKeb at 8:28 AM