I had a long streak where I felt like I lost my creativity. I've usually been quite good at looking at something and being able to make something else or compile stuff together and make it look presentable, but while I was pregnant and shortly after word I guess my mind was elsewhere.

I've got my groove back though, and I'm rolling with it until it dries up again.

So I finished these blocks for Adeline and Rowen. 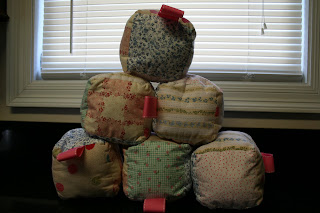 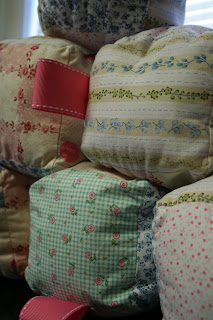 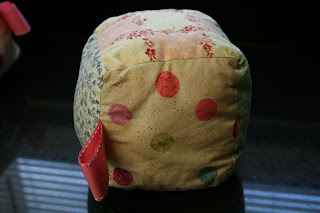 It was fairly easy to do. I just cut out equal squares of fabric and line them in a T shape with four squares on the base and one on either side at the top. Sew inside out, flip, stuff, and seal.
Adeline has some for her crib, and I am going to give some to my friend who is due in November.
So I guess it makes a good homemade gift. If Adeline wouldn't already have the baby Einstein plush blocks I'd have made some in bright colors or something.

Oh yea and I also finished her paci clips a couple of weeks ago.
The whole pacifier thing is a frustrating tale. 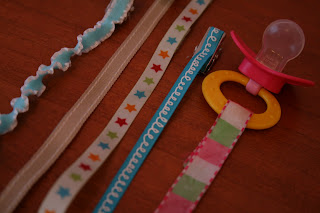 Adeline has always been dependent on them since she can be [very] easily stirred.
Well I've tried 3 times now to take them away. Once when she was only a couple of months old because Philip and I had decided in the beginning that we weren't even going to do pacifiers. That changed I think on day 3 of her being born. haha.

So when she was about 2 months old I hated always sanitizing them, and Gracie's [my black labradoodle that is supposed to be shed free but sheds like a MANIAC] hair always get's stuck in the crevices. So I took them away which lasted all of one hectic day before I gave in.

Then I decided okay only paci for bedtime which worked out great until I realized she wouldn't sit quietly in a grocery store without one. Which led into most public appearances. When Adeline get's bored she gets fussy, and she gets bored easily. Am I wrong for taking the easy way out with a pacifier? Perhaps, but it gets us through the outing. Gave in again.

Then I decided when she was about 5 months old: Cold turkey no paci. SHE STARTED SUCKING HER THUMB. Now I'd much rather her suck a pacifier than a thumb because the pacifier wold be easier on her teeth and easier to take away when I have to.

Even now at night I check on her with no pacifier and a thumb in her mouth.

So now I'm afraid it's too early to take them away because I don't want her sucking her thumb. It's cute now that she's a baby, but i have a feeling it won't be to cute as a toddler.

I still have a rainforest baby art canvas gift I'm working on, and I still am working on Adeline's first word book. I also want to do her feet art hopefully Wednesday or Friday. Lacy has inspired me to quit being lazy with my scrap-booking, so hopefully I can get on some of that and make it pretty.
I want Philip to build her 26 wooden blocks too, and I want to do some vintage looking alphabet blocks. I'm not quite sure how I'm going to go about it but I've got a couple of ideas floating up here.

I sure wish I had my craftroom back. I didn't appreciate it when I had it.

Sorry for two updates in one day.
Posted by CourtneyKeb at 12:03 PM