There's something about a holiday that just makes me want to go all out, and right now I've got Father's Day on the brain. It's in like what a week? and a half? Yea.

I found out I was pregnant with Adeline at the end of May 2008, which meant that Philip got to celebrate his first Father's Day.
He didn't really get it, though.
When I gave him a box full of "Daddy" themed baby books, he gave me a look like, "Really? you used a gift opportunity for books?"
YEA FOOL, BOOKS TO READ TO YOUR CHILD....in 9 months
So then I bought him a fishing shirt, because it was only $4.99 and I was too mad to spend anything more.
LAST Father's Day I spent a long afternoon constructing and writing the perfect Father's Day card ever so sweetly to whom a..... more emotional and less caveman father would be warmed at the heart.
He read it and put it on the night stand and immediately dug into his breakfast in bed. I mean it had a baby foot print, a Barkey paw print, and a Mommy lip print as the signature, if the words didn't do it for ya COULDN'T THAT?
no resentment here, eh?
Good thing I'm smart, because I had another fishing shirt for him, and this time he graduated to $9.99 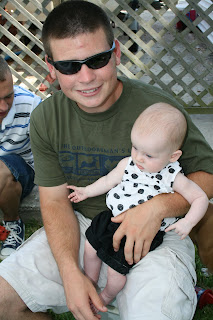 but that wasn't all.
THIS shirt forced him to wear the HEY I'M A DAD title.
No really.
It was sporting fishin' in the front,
and baby feet in the back. 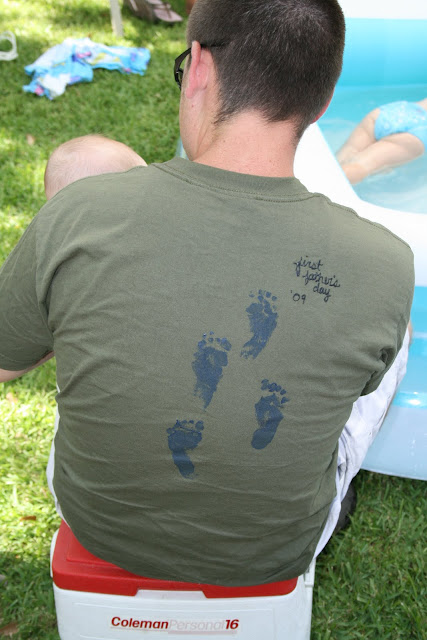 This year I thought he'd be offshore for Father's Day, so I skipped the mushy stuff and went straight for his heart by buying him a BBQ pit with the vacation money I'd saved up.
Yea, he liked that.
and I like that it encourages him to cook OUTSIDE and out of my CLEAN kitchen.
anyway.
turns out he will be home for Father's Day, and you know what he's getting?
A fishing shirt.
With toddler feet.
maybe even $14.99 price range.
Oh yea.
He's movin' up. 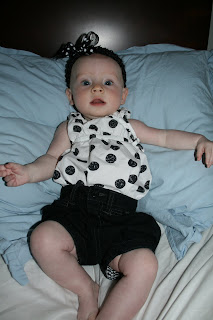 [on a side note, look how precious my little 4 month old baby was. Shaaaa]

Posted by CourtneyKeb at 4:53 PM