Hey there.
Busy busy, but I wanted to stop in and link up to a baby food post I did about 2 years ago for everyone who has been asking lately.
A lot of my family and friends have been asking me, messaging me, and texting me some baby food making questions, and I know I haven't gotten back to most of ya'll, so how about I just make this a mass reply?

Really there's a lot of sources and recipes and tips on baby food making across the internet, but if you were wondering how I go about it here's a post I did on it back when I was making Addie's.
http://courtneykeb.blogspot.com/2009/08/homemade-baby-food.html

Since I've been stocking up some fresh baby food for Gideon, I've switched from pureeing in my small food processor to a Ninja. It's really awesome, and gets a really fine puree in a short amount of time.

This morning Adeline and I were up before the boys, so we made apple muffins and we made Gideon some apple sauce. It was so crazy to think that this time last year I was making baby food for Addie, and now she was helping me make some for her little brother. Really surreal! 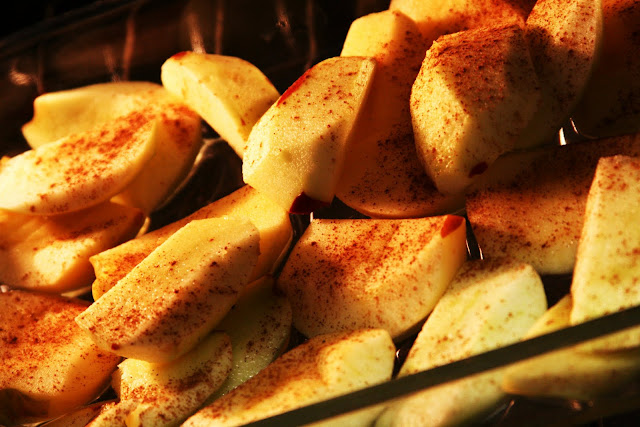 Oh my house smelled heavenly though.
Apples and cinnamon roasting in the oven smelled so good that even after they were done I just put the warmer on to prolong the smell.
Mmmm!!!!
Posted by CourtneyKeb at 8:53 PM