My highlights for the weekend included the following:

- buying white bunk beds for our girl(s)
-Bible Study with Philip & our life group + the roast beef poboy we had there was pretty rockin.
- Philip pressure washing the house and porches [omg the house looks brand new]
- Gideon passionately practicing "GoGoGoGoGO!.." while either watching or participating in some form of ball
- having quiet time to myself for reading during nap time WHILE the house was relatively somewhat kind of clean of course minimizing the guilt of propping my feet up and not doin' a thang!
-force cuddling with my husband. [He likes to nap when the kids nap, and I really hate napping. Actually I like it, but when I nap I sleep even more awful at night which I hate. Plus I get valuable clean/read/study/craft/internet time when I don't have kids in my legs/face/arms/feet. So I always fight his pleas to nap on weekends when he's home, but I reluctantly gave in this weekend since he's back working on the roads during the week .] ANYWAY I enjoyed it. Even though I pretend pouted and fought it a little.
-internet browsing floral sheets for our girl(s) room which totally has way super adorable potential if I ever execute the plans in my head for it. So weird saying "girls" like I have two, because I do now.
-Adeline's outstandingly, impressive behavior at Sunday School, Academy, and lunch after church all in one morning. [Record books, people.]
-Sweet children and friends @ a birthday party on a pretty afternoon
-and a nectar cream snowball followed by a strawberry cheesecake snowball a few hours later.
Both of which left me feeling as though I were cheating on my faithful coconut flavored snowball when ordering, but feeling wild and crazy and spontaneously satisfied on my curve-ball choices that left my lips red, my fetus dancing, and my belly happy for an hour or two to follow. 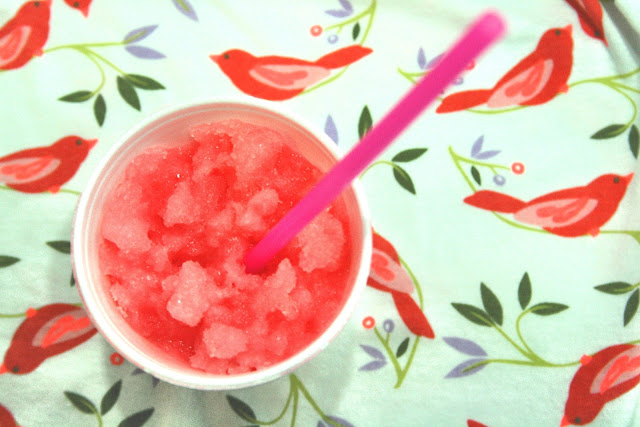 Also I want to tell you at one point when I was little I remember my grandma told me she was on a snowball diet.
She figured if she had a snowball for each meal she'd lose weight and still be super satisfied.
I kind of thought that was crazy.
Well, actually she was crazy.
BUT
Grandma knew where it was at.
Because snowballs are good.

Posted by CourtneyKeb at 8:54 PM