I found at about 13 months (in March) Adeline seemed really bored with most of her baby geared toys.
That's not exactly what you want to see after a slew of toys came in for Christmas and her birthday in February.

So I assumed she needed more brain stimulation and decided puzzles were the way to go.
I looked around the internet and decided to go with this farm animal Melissa and Doug puzzle 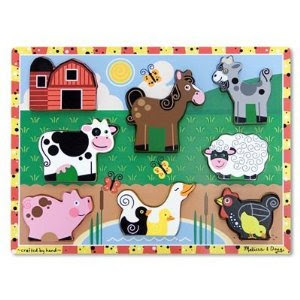 Amazon
and this magnetic fishing Melissa and Doug puzzle. 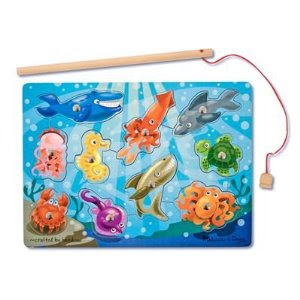 Amazon
I will say that these two puzzles (her firsts) were such awesome investments.

Within a week she was saying the sounds of all of the farm animals on the puzzle, and within a matter of minutes she was fishing with a magnetic pole.
I was really fascinated at her ability to know were the  magnet was on the puzzle piece and coordinate her self to fish the exact piece she was looking for.

The puzzles have been around for over 2 months now, and amazingly enough all of the pieces are in tact and played with daily.

I loved them so much I ordered these for her: 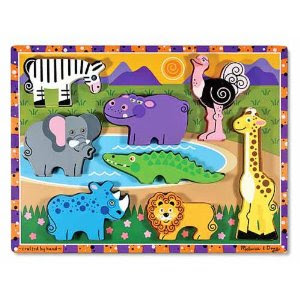 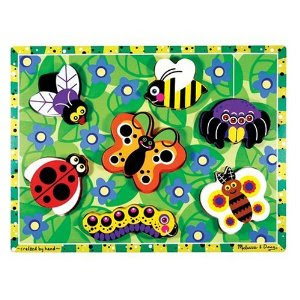 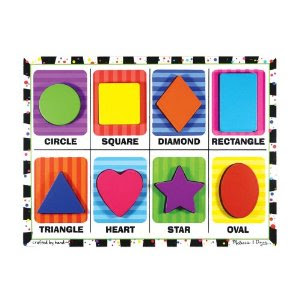 Amazon
Can I just brag here for a minute?
Of course I can, it's my blog.

This girl.
This young 1 year old.

Puts the pieces where they go.
One night last week after she went to bed, I did my nightly toy pick up, and I found her farm puzzle JUST like THIS! So the next morning I dumped all of the pieces on the floor, and put the puzzle board on the fireplace step and watched her match each piece. 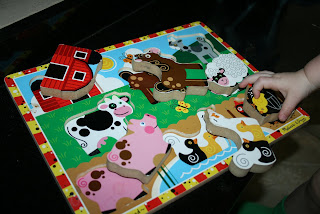 I was smiling from ear to ear with an enormous amount of pride.
I had no idea she knew how to match the pieces where they go.

Even with the fishing puzzle, it doesn't have pictures where the shapes go, but she still tries to fit each piece until she get's it right, and by now she has memorized where each sea animal goes. 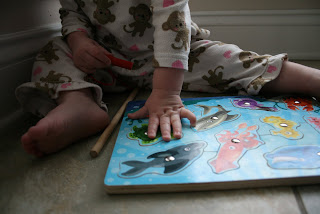 I'm thrilled with the large amount of smarts my tiny little has gotten in such a short period of time.

I definitely recommend these chunky wood puzzles for little ones in the 1 year age group.
The age recommendation on Amazon is 2-3, but they are exactly right for where Addie's at.
I probably wouldn't go younger, because the pieces have a paper print, so if they're mouthed they disintegrate. They're great for learning animals and sounds, hand eye coordination, playing with the individual pieces, and even for color and shape identification.


So yea, there's my Melissa and Doug chunky wooden puzzle review.
4 thumbs up!
(2 of mine, and 2 of Addie's)
Posted by CourtneyKeb at 6:57 AM