-In response to my last post: I'm super excited about getting all of you some mail out! Be patient with me, I'll be slow, but hopefully compared to the bills and trash mail you might normally have, I hope it at least brings a little smile to your mailbox. Thanks for sending your addresses, and feel free to keep them coming if you haven't already emailed me.
-In response to my post before last: Thank ya'll all for the prayers and encouragement about my contractions. I go to the Dr. this morning, and I'm just praying little Gideon is going to slow it down and hopefully I won't be on bed rest or medication or anything like that.
& for today's post [hehe]
You could be bored reading about my week's favorite things, but I'm not bored gushing about them so you'll have to just have to excuse me once again. :) 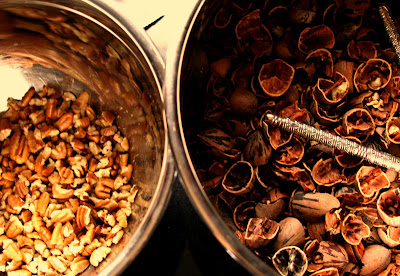 Pecans top my list this week. That's so weird since I'm usually not too much of a nut person. A few weeks ago, when Philip was home we picked pecans at his grandparent's house. Well we ended up with a ton to try out and crack and what not, which isn't a problem because um you can bake a million things with pecans and the fresher=the yummier! I've been needing to make my pumpkin muffins all week because I had a pie pumpkin that really needed to be cooked before Adeline got her hands on it and threw it like a basket ball again. So all week I've been slowly cracking pecans intending on putting them into my muffins. Well the muffins never happened because Addie and I couldn't stop eating the pecans. They are so good and so fresh that we couldn't stop ourselves. Mmmmmm! 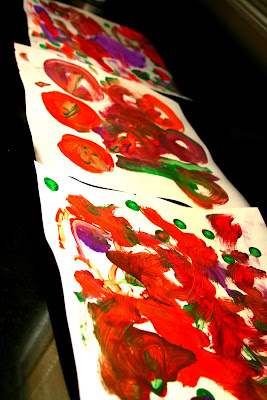 Adeline's work of art is always my favorite, but with these colors I'm really loving her paintings. I'm also really proud to announce that she knows all of her colors upon identification. She can only say purple, pink, blue, red, black, and only sometimes yellow, but she'll point out green, orange, white, and brown if you ask. ;) She's a little smarty pants! I take the credit for teaching her her colors, but Leap Frog gets credit for the letters, and my Shapes App on my Iphone gets the credit for her shapes. ;) 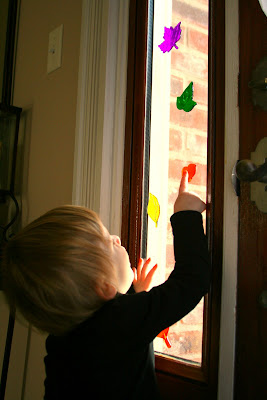 This may be more Adeline's favorite than mine, but it keeps her busy so I'll take it! These little leaf window stick ons were in the dollar bin at Target. Can't beat that! I'm sure it won't be long before they're all too full of dog hair and cheerios to stick to the side lights, but we're enjoying them while they last. 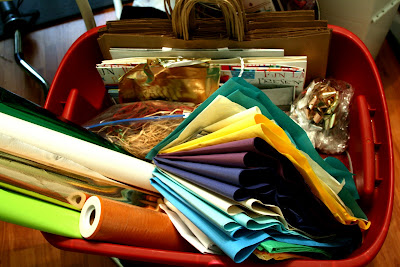 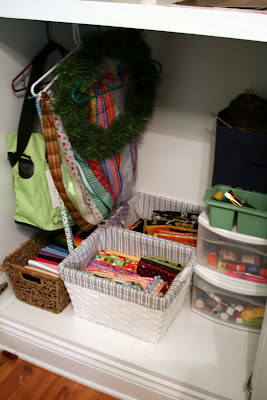 Does this look like regular gift wrap, fabric, and craft junk to you? Well it looks like progress to me! Remember how I mentioned I had to switch my craft room to Philip's work out room and then turn my old craft room into Gideon's nursery? Well I'm working on that very slowly. I only say slowly because that's the only pace I can seem to tolerate, or else it would have already been done two months ago, and might I say that I've been doing it by myself during nap/bed times. It's a bigger job than it seems, I assure you, but I've made a big dent! What you see here is some organized things in my new craft room, which still has Philip's junk in it because again, I'm working alone here. [Can you sense a little animosity there?] Oh it's alright when I'm feeling good I love organizing, but this is proving to be unusually exhausting for me. Foo! 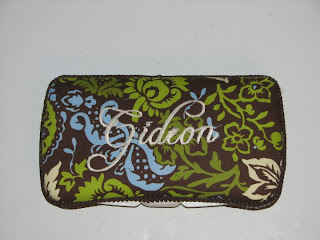 This is a precious little wipe case that my friend Rachel made us. I was scanning some of the new things she posted on her Cutie Pie Crafts FB when I came across this wipe case and thought the little thumbnail was cute. So I clicked to enlarge it when I realized, whoa that's for my baby... and that's my baby's name.... and uhh I have another baby, a baby boy. Haha, I don't know, it was just the first time I saw his name written out somewhere else I guess, and then it kind of hit me that I have two babies now. 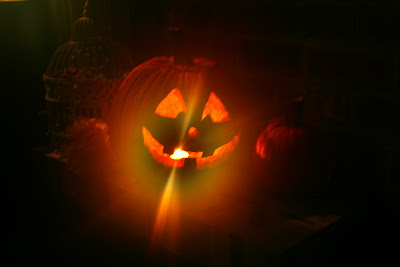 and this is my favorite picture this week!
Last night I realized that I didn't have a picture of Addie's pumpkin at night while it was lit. So in the humid, muggy, gross, rainy night I snuck out and took a quick shot before the mosquitoes ate me alive.
When I scrolled through the couple of shots on my camera, I was bummed because I didn't realize my lens had fogged up, but when I uploaded the picture to my computer I thought it was awesome!
The combination of the flicker of the candle and the fog really depicts the actual weather last night, and it's a cute little pumpkin too! Too bad we did him too early to last until Halloween. He's getting a little moldy and will be on his way to the garbage can before Friday. ;)
Oh well, ya'll know I could go on and on, so I guess we'll wrap it up here. I've got those pumpkin muffins that I won't shut up about to bake. ;)
Happy Thursday! :)
Posted by CourtneyKeb at 6:00 AM