Yesterday was our wedding anniversary.
We've been married for 4 years now.
Is it wrong to say it feels much longer?
We've been together for almost 9 years, so maybe that's why.
It's like I don't even ever remember being without Philip.
Anyway, of course it's a Thursday so he had to work.

I was a sweet wifey and woke up at 5 to make him homemade pancakes.
Then our day filed suit and babies woke up, and routines fell in place.

Adeline had some friends come and play, which is something I always enjoy too!
I love a house full of happy, laughing kids. 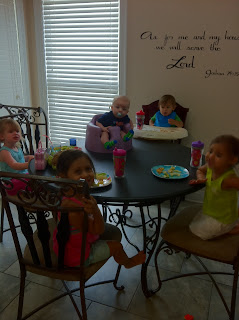 After our company left, we took naps, and I got ready for my evening out with Philip.
Of course I was ready early, so I took pictures with my sweet boy [partially because I don't often have make up on and also because he was making really cute noises and faces]. 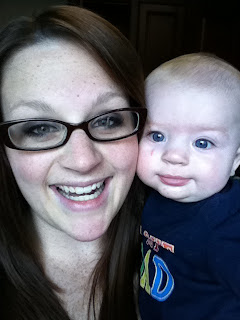 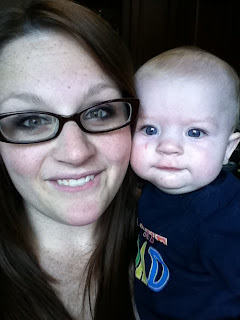 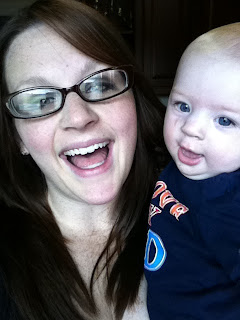 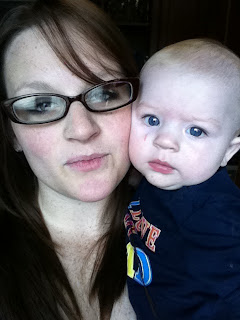 I know that was cheesy overload for you, but Gideon has so much fun looking at our pictures together. He giggles and gets really giddy from looking at Mommy and what he probably thinks is just another baby.
I should move on. I'm wanting to go wake him and squeeze him right now. 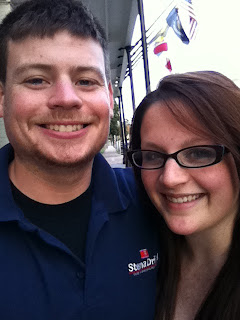 Kebodeauxs like to eat. So uh, we just decided to go to a super yummy restaurant in Thibodaux called Fremins. (Alone) [As in baby-free] 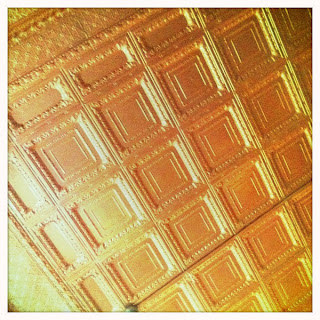 It was a fancy place. Candle light really just illuminates this gorgeous ceiling, which I stared at equal amounts of time as I did my husband. 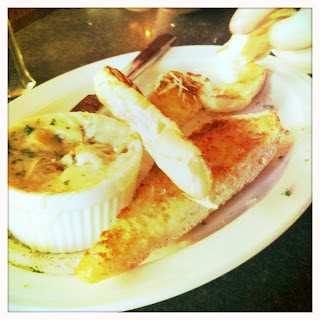 Okay. You know it's a special night when we go to a fancy restaurant and order an appetizer [and dessert too]. This was a delicious crab dip and french bread, but our main entrees were sooooo yummy and good and beautiful. I forgot to take a picture though. 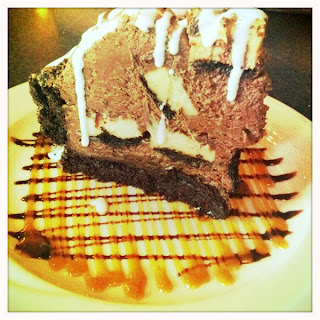 but you know I took a picture of this dessert. Chocolate mousse cake with cheesecake chunks baked in.
PLUS REALLY CUTE DRIZZLES OF SAUCES ON THE PLATE.
[that was my favorite part].
Mmmmmmmmmmmm it was sooooo good.
We had some good conversation and joked and laughed and really enjoyed our time together without stopping to wipe drool or threaten to put one in the car by herself.
[Just a threat people, chill out].
Then I got to relive all of the goodness when I ate my left overs for lunch today.
[Sorry diet, it was my anniversary]
We picked the kids up just as the sun was setting. 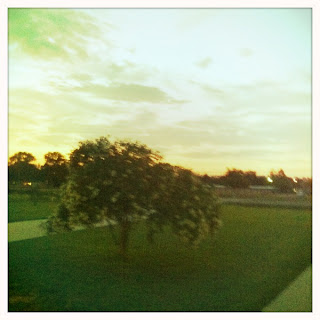 Pretty!
Put the kids to bed, and went to bed ourselves.
Oh yea, but not without swapping gifts first.
Philip gave me this: 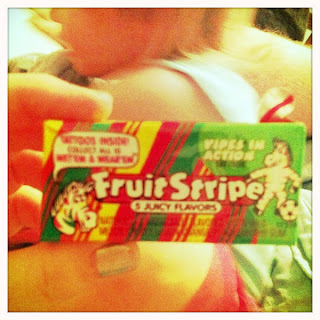 Zebra gum!!!!
Haha, we were talking the other day about how it was a child hood staple for us when exiting the grocery store.
I mean the wrappers have tattoos on them. Awesome? Yep!
Blogging is more than likely to take a hold now.
My computer has been kicking the bucket for months now. We keep trying last ditch efforts in saving it, but we pretty much just need a new one.
and although I love to blog, and there is a lot more I love to do on the computer,
it's not a priority to get a new one right now.
So unless someone out there will just suffer something aweful without my blog updates and wants to donate a brand new computer our way (just kidding, yall)
I'll probably be a little MIA around the blog, until we pay down some of our other things and are able to get a new one.
I do expect to be getting a lot more done during nap times though.
There are books to be read, things to be cleaned, and sewing to be done.
Until next time.
:)
Posted by CourtneyKeb at 2:29 PM