Today was a different Saturday.

I woke up and agonized at the thought of getting out of bed, which is nothing different at all.

I was happy to know that instead of working Philip was out doing what he loves the most--fishing.
He's been working so hard and so long lately I was happy he was enjoying his time on the water even if it meant another Saturday we don't see him.

I got myself and the kids dressed, walked Scarlet, ate a rushed breakfast and headed out of the door.
I dropped off Gideon at Philip's mom's house for the morning, and Adeline, Scarlet, and I headed to "puppy school". 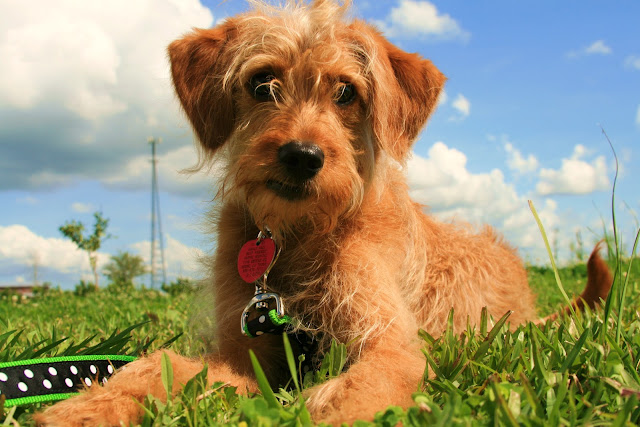 Scarlet.
[That Labradoodle we got last fall.]
Man.

She's crazy. Like 5 handfuls kind of crazy and I don't even have 2 handfuls to offer her because they're already filled and busy.
It took her 4 months to house train.
She steals the kids food, toys, and socks.
She jumps on the table..
She will not listen.
She has energy that can outlast every single human in this household (including my 3 year old).
She loves people so much so that when we have company she can literally not control herself and jumps, licks, etc whatever she has to do to maintain their attention.
and that's just the big flaws.
Well, I've tried so hard to train her, work with her, give her extra attention but truth is, it's been hard.
I've got 2 kids and I've been sick and pregnant with another.
Plus.
The worst part....
She isn't Gracie.
I kept feeling guilty because sure Scarlet can be cute sometimes and the kids do love her.
But really I think I expected her to just fill the spot Gracie had around here, and she didn't. She doesn't.
It's not her fault, she's just a happy, spoiled puppy full of energy and love.

I'm not sure if it's the fluctuating hormones or just an overly sensitive heart missing my dog, but I've cried many nights the past few months missing the big black hairy doodle body I'd hug to sleep.
Gracie was such a companion to me, especially when I was sick with my other two pregnancies.
It was really hard not having her next to me during so many sick days and nights this time. 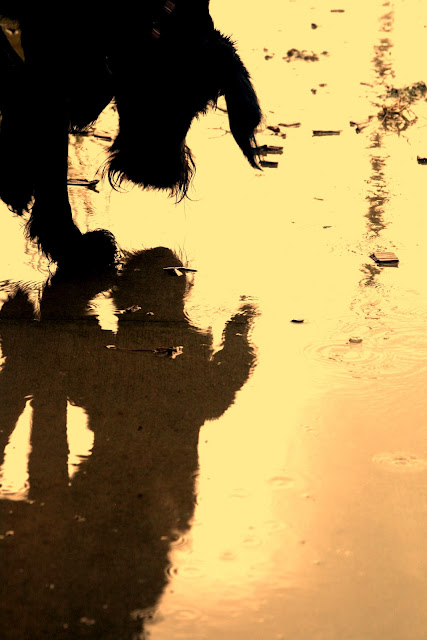 This is the last photo I took of Gracie a few days before she died.
Is it weird that I miss an animal so much?
Hah, sometimes I don't even think she knew she was an animal.

Anyway, Scarlet was rubbing Philip and my nerves so raw.
We decided to give her a little bit of extra time during the day accompanied with some additional training.

So, with Philip on his fishing trip, Adeline and I took that wild girl to her first day of puppy school.
I think it went really well, as I have already learned so many useful tips.
I am so so so excited I decided to go! I'm relieved that Scarlet's issues are considered normal, and I'm relieved someone has promised me a change. I'm relieved at the chance to welcome her into our family as she slowly earns a valuable place as special as Gracie's was.

We're in a beginners class with a St. Bernard (omg I have a huge doggie crush on that breed and want one badly!), a yellow lab, a yorkie, and a poodle. My heart fluttered straight out of my chest when I saw the couple of St. Bernards. I love a big dog. Scarlet was terrified, but I was in absolute love. It made me miss Gracie so badly. She was only 60lbs, but I loved that I could wrap my warms around her and just hang on her. I seriously kept wanting to just give that big ole St. Bernard (named Gumbo) a big human hug, but I didn't want to creep his owner out.
Okay.
Anyway. Half of that training session I kept thinking of how much Gracie would have loved to be there and how she would have been insanely happy. I regretted not ever doing that with her, and then I felt guilty for doing it for Scarlet.
Yall, am I weird or what?

I've pretty much cried throughout writing this whole post, and I have to stop and say out loud,
its only a dog. She was only a dog. 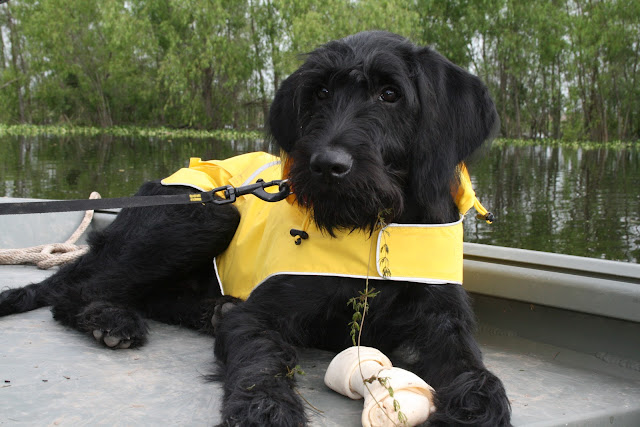 and then just saying that makes my heart hurt all over again.
Oh yea, if this makes no sense to you, our first baby (a dog, Labradoodle, Gracie) was killed in October and I'm slightly crazy and had a very difficult time getting over her.
Oh well. I know that to non dog lovers this post is probably laughable.
Surely you actually did laugh at me.

So I'll stop being sappy and over-sentimental now. Philip may come home soon, and he thinks I'm crazy enough without walking (yet again) to me crying about missing my dog during a random time in the middle of the day. 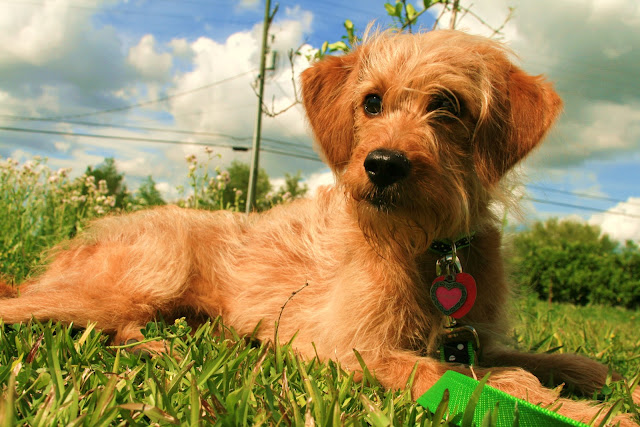 She's sporting her new up-sized collar that we bought her today.
(coincidentally green on St. Patrick's day)
((St. Patrick's day hype is silly and overrated, unless you are in fact Irish, if you ask me. I put on a touch of green on me and the kids to protect obnoxious whackos from pinching, and then just go about our business.))
Scarlet is 6 months old now, and Lord have mercy she is finally house broken.
She doesn't do many special things unless you include chasing her tail under the special category.
Adeline and Gideon both find that hysterical by the way, I however don't usually find it hysterical until she's done it for so long she's dizzy and can't walk. Now that's funny.
She weighs around 20lbs, and we don't expect her to get but maybe 15lbs bigger at most. I'm kind of hoping she gets really big though, I love a big dog.
She's really a sweet puppy when she's not acting like a psycho.
:) 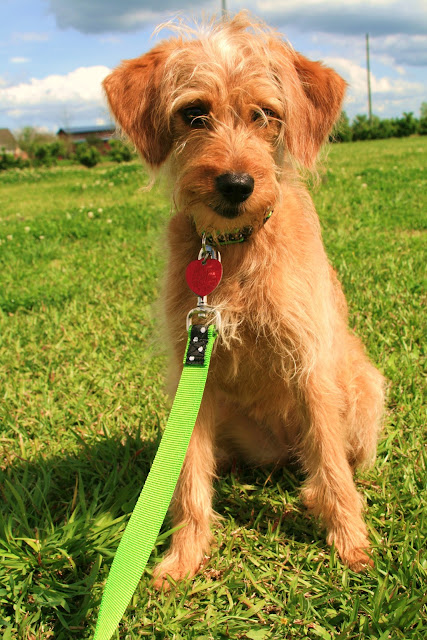 Posted by CourtneyKeb at 3:31 PM